An efficient Adaptive Mesh Refinement (AMR) algorithm for the Discontinuous Galerkin method: applications for the computation of compressible two-phase flows 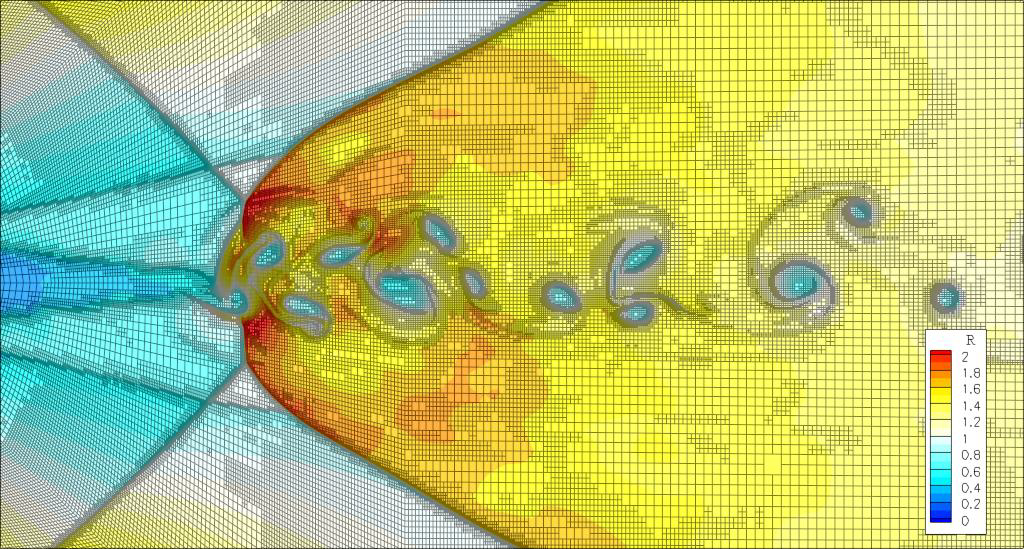 We present an Adaptive Mesh Refinement (AMR) method suitable for hybrid unstructured meshes that allows for local refinement and de-refinement of the computational grid during the evolution of the flow. The adaptive implementation of the Discontinuous Galerkin (DG) method introduced in this work (ForestDG) is based on a topological representation of the computational mesh by a hierarchical structure consisting of oct- quad- and binary trees. Adaptive mesh refinement (h-refinement) enables us to increase the spatial resolution of the computational mesh in the vicinity of the points of interest such as interfaces, geometrical features, or flow discontinuities. The local increase in the expansion order (p-refinement) at areas of high strain rates or vorticity magnitude results in an increase of the order of accuracy in the region of shear layers and vortices.

A graph of unitarian-trees, representing hexahedral, prismatic and tetrahedral elements is used for the representation of the initial domain. The ancestral elements of the mesh can be split into self-similar elements allowing each tree to grow branches to an arbitrary level of refinement. The connectivity of the elements, their genealogy and their partitioning are described by linked lists of pointers. An explicit calculation of these relations, presented in this paper, facilitates the on-the-fly splitting, merging and repartitioning of the computational mesh by rearranging the links of each node of the tree with a minimal computational overhead. The modal basis used in the DG implementation facilitates the mapping of the fluxes across the non conformal faces.

The AMR methodology is presented and assessed using a series of inviscid and viscous test cases. Also, the AMR methodology is used for the modelling of the interaction between droplets and the carrier phase in a two-phase flow. This approach is applied to the analysis of a spray injected into a chamber of quiescent air, using the Eulerian-Lagrangian approach. This enables us to refine the computational mesh in the vicinity of the droplet parcels and accurately resolve the coupling between the two phases.